by Bashiera Parker
in Cooking Guides and Tips, Features
0

The method of making a self-saucing pudding is relatively simple. You make a mixture, similar to that of a cake batter, and pour it into your baking dish. You then sprinkle the surface with the components of your flavour of choice – perhaps sugar and cocoa, if you’re making a chocolate pudding – before pouring hot water over the back of a spoon to gently and evenly hit the surface.

Of course, what you’ll see now is a brown mess floating atop your batter. But by the end of its time in the oven, a springy treasure chest of chocolate cake boasts is revealed – and when you dig into it, the sauce reveals itself underneath like liquid gold.

Did the cake invert itself? What kind of sorcery is this? Haters will say it’s fake, but the magic really is all in the cake! Let’s get into the science of it. 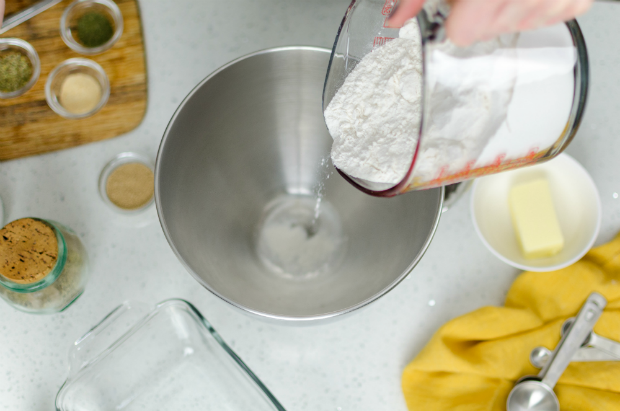 It all has to do with the rising and sinking of the two layers as a result of the self-raising flour (or combination of flour and baking powder), and the density of the sauce mixture.

I dug deep to find the full breakdown of the exact chemistry behind the self-saucing pudding and, of course, at the end of the internet wormhole, ended up on Reddit.

One user, a professional biochemist – and avid cook – breaks it down nicely.

“Near as I can figure, the layering and mixing of ingredients sets up different barriers to certain reactions. Much like composite material composition, here each layer can only interact with the other layers in very specific ways,” user bc2zb explains.

“At the bottom, you have a fairly standard batter that is well-mixed. The batter is not going to mix well with other things, as the flour is hydrated, and you’ve got some gluten formation going on, creating somewhat of a structure. Also, think about sprinkling flour or sugar onto a batter or dough –  it doesn’t get swallowed up regularly, because wet flour behaves differently than dry flour.

“Cocoa powder and brown sugar are a little easier to think about. Cocoa powder is starch, and brown sugar is sugar. Usually, cocoa powder has to have undergone Dutch processing in order to dissolve into hot liquids well. Lastly, we have hot water. The hot water hits the sugar and cocoa mixture first, mostly dissolving them and creating, presumably, a saturated solution. When this hot fluid hits the batter, it gelatinises the surface starches in the batter, setting them up. Then we have the actual baking process, where the rest of the batter rises and pushes the gelatinised starches up, and the sauce is slowly created as the baking process proceeds.”

The long and short of it? The two layers won’t mix. The cake-like batter – whether you use self-raising flour or plain flour with baking powder – has rising agents in it, while your sauce is a lot heavier, allowing it to sink to the bottom. It essentially passes through the cake – which is in the process of baking its best self for you – leaving a bit of moisture behind and taking bits of the cake with it to form a thicker, stickier sauce. And that’s it!

5 self-saucing puddings to get you started

Whether you’re a believer in the magic of it all or the chemical breakdown is enough to intrigue you, try these five easy recipes and see for yourself – the proof, after all, is in the pudding.

Fun festive food for the kids