Parusha Naidoo’s cookbook, Least Effort Most Reward, is an exciting addition to the local food scene. A product of its time, the offering is plant-based, reflecting the growing interest in the vegan lifestyle and plant-based eating the world over. It goes against the grain in a charmingly authentic way that is reflective of its author.

Least Effort Most Reward is a self-published digital cookbook boasting 21 illustrated Afro-Asian plant-based recipes. Taking a cue from the philosophy in its title means that the delicious dishes included pack a punch with little strain. So, if you prefer spending less time in the kitchen while making high-impact meals, this book is a treat.

With it, Parusha delightfully weaves in food politics and histories with nuance and care. Her communal approach to the book shines a light on the thrilling potential of the fusion of African and Asian cuisines. The book costs R200 and for the month of May, all proceeds go to Food Forward SA in awareness of World Hunger Day on 28 May.

We chatted to Parusha about the making of the book and the message behind it. 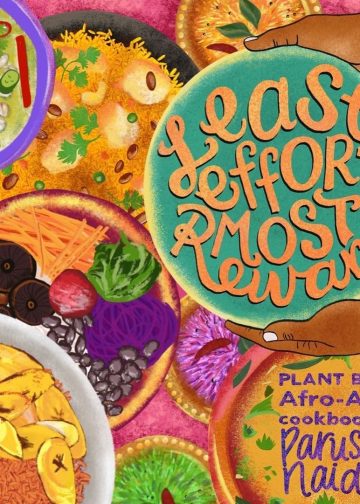 You transitioned to a vegan lifestyle 10 years ago. How has that journey evolved over time?

The movement of place and time has changed the way I approach the lifestyle now. I became strictly vegan overnight in Berlin after watching many films about cruelty in the meat industry. They were mainly American and European movies and were shocking. I decided I did not want to ingest that pain of animal cruelty into my body. And growing up in South Africa during apartheid, I wanted to extend my philosophy of freedom and equality to all living beings. I also discovered Sista Vegan (by A. Breeze Harper), an African-American intersectional vegan, around that time and her approach resonated with me.

On returning to South Africa six years ago, I realised that veganism was quite normal in Berlin and not in Joburg or Cape Town. I struggled at first and had an existential crisis of sorts as I had become so anti-meat that I did not want animal products in my home nor wanted to sit with others who were eating flesh.

Psychologically, I struggled and had to readjust my ideas to stay sane. I also had to face my own hypocrisies. My friend Zayaan Khan, who I met in that first year, pointed out that all mass production is cruel to humans and pointed out that cruelty is prevalent on fruit, vegetables and wine farms, in the fashion industry, in most areas of our existence.

So now, in terms of diet, I call myself plant-based. It is a less political affiliation than being “vegan”. I aim to sustain how I live for the rest of my life – living as cruelty-free as possible and eating mainly plant-based whole foods and avoiding processed food and animal products.

However, I am not perfect and don’t seek to be. I make exceptions for eating out, special occasions and heritage foods. And whatever my grandmothers, aunts, family and friends make, I will eat it because to not eat their food (that they have made with love) does more harm to their feelings than it does any good in the world. 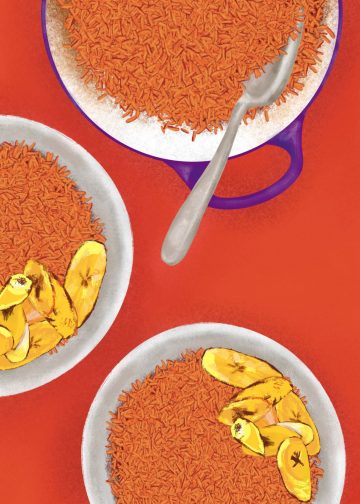 What was the process of putting this book together like?

I decided that I wanted to become an artist last year and work on a creative project. I’ve pursued many creative avenues before, including feature writing, graphic design and vegan cooking. Last year, I started drawing every day. As I have all the skills to create my own cookbook and I’ve always wanted to create one, I decided to focus on that as my creative project for 2021.

My process was pretty simple – I made a list of all the plant-based “hits” I had discovered over the years. Using my life philosophy “Least Effort Most Reward”, I wanted to share recipes that were easy to make and highly impactful. After that, I drew all the images, wrote out the recipes, and tested and tweaked them, then I designed it.

I asked a few people close to me to read through it, made some edits and then I published it online, with the help of a web designer so that when anyone buys the book it is delivered straight to their inbox. I enjoy the fact that it’s able to travel all over the world, to places I have never been to at all. And my stories and recipes can be enjoyed anywhere.

You could have written this cookbook from the premise of being a South African Indian. But you identify as Afro-Asian. How does that identity enrich your perspective?

I have two continents to draw on this way. Sometimes South Africa does not feel connected to the rest of Africa because the biggest cities are so European. And India is also often referred to as its own entity although it is located in Asia. The two countries have this separateness from the whole in common. I think that my goal is to unify people through food so I prefer to call myself Afro-Asian as there are many people like myself in other parts of Africa and the Caribbean whose ancestors arrived from Asia and currently they experience a kind of creolisation of cultures, including food culture. 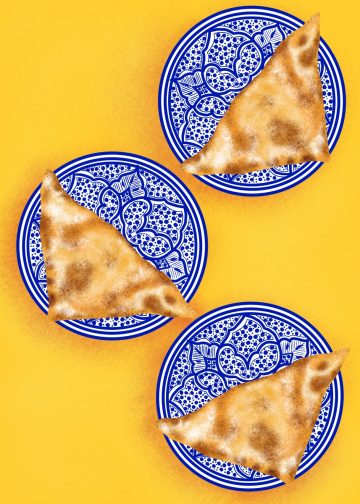 Aside from the book’s philosophy and communal approach, we love how it shows the potential in the fusion of African and Asian foods that is already happening. The idea of jollof briyani (a fusion of West African jollof rice and Indian briyani) is genius, as is the Ugandan Rolex. What stood out for you about researching foods from Africa and Asia?

I think wherever you are in the world, we all like dishes that resemble stews and we all like bread (flatbreads and fried breads are all over the place). The dishes from the Global South are generally made to feed many people at once and can stretch using cheap ingredients. It’s quite clear to see connections between us all through food and food is an interesting way to explore history. I found some of the origin stories surprising, like chillies being from Bolivia/Mexico and okra being African – I believed both these things were Asian initially. In South Africa, both mango atchar and chakalaka are embraced as African foods although they have Asian influences.

How do you think food can be used as a decolonising tool?

Our palates have been colonised so we can start decolonising there through unlearning and relearning. If we all became more curious about food from the Global South and were more critical thinkers about our knowledge and tastes that would be a great start. Why do we think of European and American food as better/elevated/higher in value than food associated with Asia and Africa? Why is our “home food” not available in restaurants? Food is a great tool to start conversations as we all have this one thing in common if nothing else: we eat.

Is there anything you walked away with from this first endeavour?

I have walked away with the skills to create another one. And I realise that I need to learn how to market it better so that it can be enjoyed by more people around the world.

How different religions celebrate with lamb

Is my baby getting enough? The when, what and how to start your little one on solids

A chef shares pro tips and tricks for cooking amadumbe