by Marizanne Knoesen
in Food News
0

Food is such a central element of cultures everywhere. What we eat and how we eat forms part of our heritage. We cook certain recipes for specific occasions.

On closer inspection of all the information at our fingertips, we see that our South African recipes can be surprisingly similar to international fare. While I’m tucking into my Thursday night dinner someone on the other side of the globe might be eating almost the same thing. If you look at some of the food we eat, whether it’s in Durbanville or Denmark, you can see that ultimately we’re more the same than we are different. That’s what I’d like to believe at least.

Bobotie (South Africa)
Bobotie is a mince-based, curry-infused dish eaten with turmeric rice and fresh banana. Many tourists are appalled by the idea until they try it! Moussaka (Greece)
Moussaka is a hearty dish featuring the main ingredients of eggplant/aubergine and mince. Potjiekos (South Africa)
Potjiekos is cooked in a cast-iron pot on open fire. Meat, potatoes and veggies stew together and I’ve heard (and tasted) that a can of Coke elevates the flavours to a whole new level. Tagine (Morocco)
Tagines are slow-cooked stews. Lamb and chicken are some of the popular proteins and fruits tend to be in the mix as well (e.g. prunes, apricots, mango). 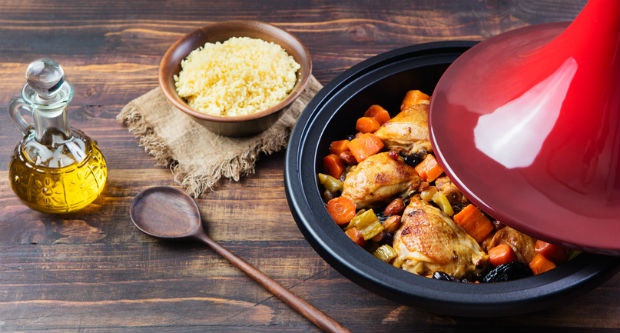 Milktart (South Africa)
Milktart or Melktert is one of the nation’s favourites. Lighter than its Portuguese counterpart, but equally delicious. Brioche (France)
Brioche is bread on steroids as the use of butter and eggs give it pastry-like status.

Know of more dishes of ours that are linked to traditional food in other countries? TELL us about them in the comments section below!

9 Peppermint Crisp recipes that will leave you giddy with excitement

You need this list in your life. by: Tessa Purdon | 13 Sep 2017 For many of us Peppermint Crisp is deeply nostalgic. Why? It’s probably got a lot to do with Peppermint Crisp tart – a lusciously creamy dessert that’s graced the table of countless South Africans.

* Marizanne Knoesen lives in the Cape Winelands and works as a social science researcher largely focusing on the future, trends and foresight. A generalist by nature, she’s intrigued by human behaviour, cultures, travel, stories and movies. You can also check out her blog.

Casual dining at its best - The Thief, Parkmore