These are the foods gaining popularity in 2022.

We’ve rounded up five exciting new foodie finds that South Africans will be eating and cooking this year. From water infused with additional benefits to double the fun with CBD infused wines, these products will be making waves in 2022.

While reducing the amount of dietary meat and animal products is not a new trend, it continues to grow in popularity due to the ongoing conversations around sustainability and the growing interest in plant-based foods. What is trending, however, are the new diet names that address this – from flexitarianism (semi-vegetarian diet focused on plant foods with occasional meat inclusion) to reducetarianism (reducing meat and animal protein from your diet).

Dietitian, health coach and owner of Intuitive Nutrition Philippa Bramwell-Jones says we will be seeing a lot more words describing a diet with less animal protein.

“I’ve already heard the murmurs of climatarianism (eating focused on reducing carbon footprint) and sustainatarianism (eating only those foods that are sustainable). I love that it shows a trend towards not only looking more closely at the effect of food on us as individuals with regards to health but also globally with regards to its environmental impact,” Philippa says.

Closely linked to the above point, are the new true vegan eggs that have just landed in South Africa. And no, they’re not traditional egg alternatives like flax eggs or aquafaba that have offered vegans or those suffering from allergies the choice to enjoy dishes that would normally be off the menu. Oh My Crack true vegan eggs are plant-based eggs that look and behave exactly like regular eggs, complete with golden “yolk” and fluffy whites, without any of the cholesterol. They’re gluten free, soy free, free from allergens and 100% plant-based. Fry them for breakfast, top your favourite plant-based burger with a sunny-side-up egg, or use them to whip up the best vegan bakes ever.

We love mushrooms for their versatility and that special flavour, and it seems their popularity is only growing. Taking cue from the growing veganism lifestyle, mushrooms are in high demand as a tasty plant-based alternative. They tick the sustainability box and can be grown in vertical farms, giving them a smaller carbon footprint. Because they are fairly easy to grow and can withstand harsh weather conditions, their sustainable quality has even extended itself to the fashion industry, with top designers utilising mushroom leather (or mycelium leather) in their efforts for cruelty-free, vegan materials.

Mushrooms are also known for their medicinal properties.

“Of the many thousands of ‘known types’ of mushrooms in the world, only a fraction is edible. Of those that are edible, only a few mushroom varieties are considered medicinal or functional. Fresh shiitake and oyster mushrooms can be found relatively easily in South Africa. While Reishi, Lion’s Mane, Chaga and Cordyceps are commonly used in supplement form as they are naturally quite bitter and woody,” Phillipa explains.

She continues: “The beneficial compounds within mushrooms include protein, vitamins (B1, B2, B3, B5 and B9), minerals (calcium, phosphorous, potassium, magnesium and zinc) and antioxidants (selenium, Vitamin C and choline). However, the most scientifically studied health-promoting compound in mushrooms is a specific type of polysaccharide called beta-D-glucans. 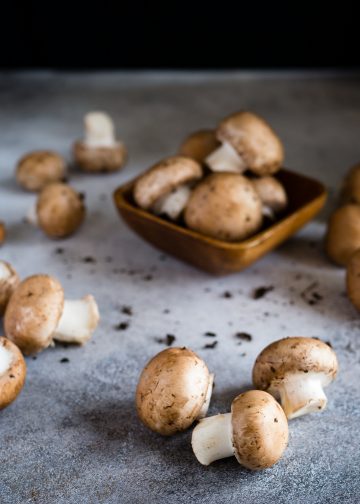 “Medicinal mushrooms are considered adaptogenic; they can both up and down regulate certain pathways including those controlling stress, anxiety, mood, and libido,” shares Philippa.

The dried mushrooms can be added to everything from soups to stir-fries, and capsules are also available from most health shops. Mushroom biltong and droëwors can now also be picked up at most health stores and offer a plant-based alternative to these meat-based local staples, while mushroom powders add that distinctive umami flavour to plant-based recipes. Also look out for mushroom beverages such as functional fungi coffee as well as medicinal mushroom skincare products.

Philippa warns, however, that as with any supplement, medical advice should be sought before using medicinal mushrooms.

Aiming to take the health properties of water beyond mere hydration, hydrogen-enriched water is reported to boost its anti-inflammatory and anti-oxidant properties. Healthline reports that a recent study of subjects undergoing radiation therapy showed that those who consumed the hydrogen-rich water experienced improved “quality of life”, with the side effects of radiation mitigated to a significant degree. However, health experts agree that further research is needed to confirm these findings. The water can be purchased in bottles, but there are also tablets available that can be added to your own water. If you want to invest in this product, there are a wide range of machines on the market that can bring the benefits of hydrogen water to your home at the turn of a tap.

Potato milk is the new craze. The appeal of potato milk is that, just like potatoes, it is a sustainable, relatively cheap alternative to highly priced macadamia or hazelnut milk.

“Added advantages include its hypoallergenic nature,” says Philippa. “Milking potatoes requires far more water to potato ratios to get the end-product, meaning that a litre of potato milk is probably the equivalent of one new (baby) potato.”

“We aren’t going to be drinking potato milk for its health benefits. Yes, it’s going to have some of the minerals, vitamins and phytonutrients present in the origin plant, but it will be in such low percentages that potato milk will ultimately require fortification.” 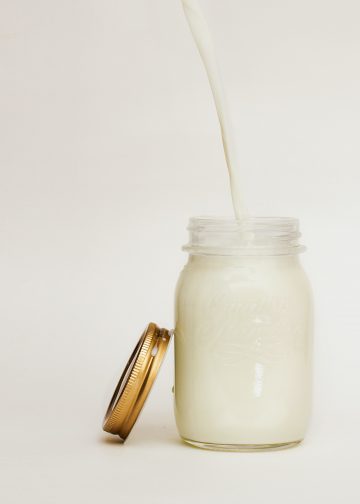 Typically known to add flavour to teas, the harnessing of its sweet and tart taste has now extended to other food and drinks including jams, syrups and yoghurt.

“All parts of the plant are used for culinary, cosmetic and medicinal preparations,” Philippa says. “The calyx (the little green cap at the base of the flower) is the key ingredient used in food and drinks and is high in vitamin C, anthocyanin and, surprisingly, iron. Hibiscus tea (made from dried calyces) is delicious served hot and cold.”

She adds: “Researchers have found that drinking hibiscus tea can substantially reduce systolic blood pressure. It is suggested that these health properties could be the result of the high flavonoid and phytochemical content of hibiscus calyces and may, if consumed over time, reduce the risk of stroke and heart attack.”

As with anything, there are implications and Philippa notes that too much of a good thing is never good. “Don’t drink too much hibiscus tea – there have been reports of both liver damage and several pregnancy-related complications with over-use. As with all raw materials, however, quality control is something that’s difficult to regulate. If you are looking to use hibiscus as a health promotor, do your research before buying the first product you see.” 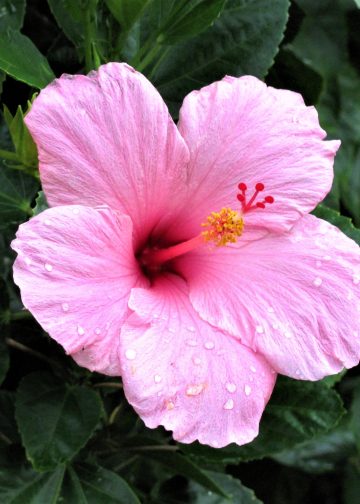 There is a local foods and grains renaissance happening and it is partly due to conscious eating brought about by the need to be sustainable in a climate that is changing. There’s also been a need to engage with and challenge perceptions of our traditional foods and grains as seen with Queen Finxa’s Sorghum Agenda.

South Africans are no strangers to the versatile ancient grain, sorghum. From the nostalgic malted mabele breakfast porridge enjoyed by children to the traditional beer brewed by generations for family celebrations, it has formed a part of many South African lives.

But whole sorghum has seen a global surge in popularity, largely due to its gluten-free properties. It can be prepared like rice with a ratio of 1-to-3 grain to liquid, or even popped like corn. It’s been showing up on café menus all over the country, and at Wolfgat (voted the Best Restaurant in the World), chef-owner Kobus van der Merwe serves up whole kernel sorghum cooked and then marinated in a sage ash with a bit of oil (its black appearance mimicking caviar) and served with fish.

Sorghum flour is also an excellent stand-in for wheat flour, suitable for everything from cakes and muffins to cookies and pies, with the addition of binding agents like xanthan gum.

But before all this, dietitian, author and African foods specialist Mpho Tshukudu had long started these conversations around ancient grains through her book, Eat Ting. She notes that the interest in ancient grains has been going on for close to eight years.

“With the movement of the paleo diet and people’s enquiry into what our ancestors ate came the resuscitation of ancient grains, not only in South Africa but the world over. In our case, South Africa is a dry country. Our indigenous sorghum and millets are not water intensive. They will survive in a drought. They have high amounts of nutrients compared to what we call our staples,” Mpho says.

She goes into detail in her book about the two forms of millet commercially available in South Africa, namely foxtail and pearl millet.

“Amadumbe (starchy vegetable loosely referred to as African potato) is also making a gradual comeback. It does not raise your blood sugar levels like other potatoes do. People are also engaging with our green leaves such as thepe and imifino, which are naturalised and don’t need water to grow. They are also resilient and have higher amounts of nutrients compared to spinach,” shares Mpho.

“The pandemic made everybody think about their wellness and I sensed people were looking for natural, healthy South African foods to help boost their health. With the borders closed during lockdowns, people were forced to look and eat local. And that is why home gardening is growing in popularity,” Mpho concludes. 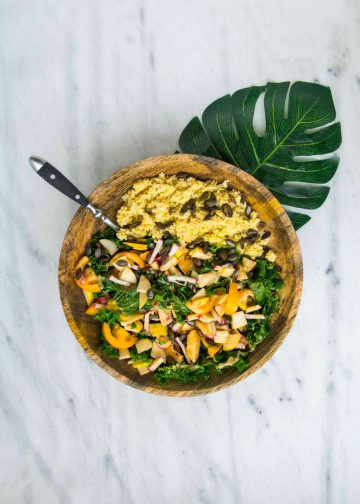 We’ve seen sparkling water and sodas infused with CBD, and now we can look forward to combining the taste of our favourite tipple with the health benefits of CBD. This trend has swept Europe and the States, and South Africa recently saw its first CBD-infused wine made available on the market. Produced by Stellenbosch wine connoisseur Charles McMullen, his range of “Wellness Wines”, Dacha Ana Noba (malbec-based) and Dacha Nuna (chenin blanc-based) were released in a limited batch that sold out in online stores like a flash. And don’t worry, the cannabinoid infusion in no way detracts from the taste or enjoyment of the wine.

Also, one of SA’s largest alcoholic distributors Distell recently acquired a 20% stake in cannabis wellness business RETHINK, an investment that would help the company to benefit from increased demand for CBD products.