Cuba‘s vibrant and colourful old world charm and the lifting of the USA travel embargo in 2016, has seen rapid growth in it’s popularity with tourists and it’s no surprise that it is now one of the hottest travel destinations for 2017. Cuba’s influence on fashion, décor, food and drinks has been termed the “Cuban Effect” and this culturally rich Caribbean island is worth exploring for many reasons! Although for most of us a quick trip to Cuba is not feasible, the Cuban culture has always been about celebration, enjoyment, colour and beauty and we can all bring a little Cuba into our homes the next time we entertain. The country that gave the world arguably the best cigars, has a culture which has been fused from Spanish and African influences creating a creolized culture that is Cuba’s alone. This melting pot has resulted in unique food, drinks and the creolized African dances and unique jazz and musical sounds. Famous for the sexy Rumba, the most popular form of Afro-Cuban dance, the sensual Tango and Congo can also be traced back to the Island. Cuban cuisine is similarly a blend of Native American Taino food, Spanish, African, and Caribbean cuisines. Today food innovation is booming with many new young chefs are starting their own fusion restaurants. Because importing can also be difficult and expensive the food focuses around local produce, from locally raised meat like pork, to fresh fish and other seafood, and locally grown fruits and veggies — you could call it a Cuban slow-food movement. However one of Cuba’s greatest exports is their premium rum. Which is also largely the reason why Ernest Hemingway spent quite for a years in Cuba – the delicious cocktails were too enticing. Rum is created by sugarcane and the Caribbean climate, terroir and the fertile soil in Cuba makes the growth of agriculture products ideal.

Cuban rum and in particular the local produced Havana Club run has a distinct character: a less weighty style than found on other Caribbean islands, but still packed with flavour. The historically unmistakable crisp taste of the rum comes from the Spanish influence, as the royal family preferred delicate spirits. This makes it an ideal candidate for cocktails, as you get all the flavour but without the dark sugars that often drag down heavier rums. Even the Havana Club 7 dark rum, aged for seven years and rich with mature flavours, is light on the palate. Havana Club is produced through a joint venture between the Cuban government and the French company, Pernod Ricard, ensuring that the heritage of Cuban rum-making tradition is in place and is the most awarded rum with 25 medals in tasting competitions over the past four years. In South Africa, the Havana Club range includes Havana Club 3, a white rum; Havana Club Especial and Havana club 7, which are both dark rums. Premium rum can be enjoyed by sipping on the rocks, similarly to the way in which you might enjoy a good whiskey.  However, if you prefer to drink your rum with a mixer or in a cocktail, we have a few choice recipes which will you get in the Cuban fever: 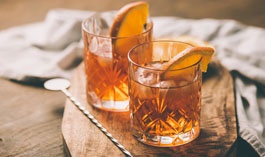