by Rita Grobbelaar
in Cooking Guides and Tips, Featured, Features
0

Chef Sepial Shim serves up authentic, flavour-packed Korean fare at Cape Town’s popular OZC Farmer’s Market at the V&A Waterfront every week. We reached out to find out what what her top five essential flavours are when it comes to anything and everything Korean – perfect if you’re an adventurous chef wishing to expand your kitchen repertoire, or even just a home-sick expat searching for that unmistakable taste of home.

Considered the main seasoning in most Korean dishes, ganjang (soy sauce) is to Korean cooking what salt is to western cooking. If you are serious about your journey into the world of Korean home-cooking, consider investing in authentic Korean ganjang. Popular brands include Sempio and Chung Jung One, and there are the more expensive, naturally fermented versions, as well as more affordable versions produced by mixing chemically manufactured soy sauce with naturally fermented ones. The untrained palate will probably not be able to tell the difference, but it’s worth experimenting with what works best for you.

There are also two distinctly different styles, with the traditional guk-ganjang (soup soy sauce) being lighter in colour and taste and mainly used for seasoning entire dishes, while the recently introduced darker, less salty and sweeter jin-ganjang is preferred as a dipping sauce or light seasoning. Ganjang can be stored at room temperature, away from direct sunlight or heat, but keeping it in the fridge once opened is also advised. Usually soy sauce has a two-year shelf life, but after two months the flavours might become affected.

A staple of every Korean kitchen, gochcugaru chilli powder or flakes (depending on the grind) are made with Korean red gochu peppers. Gochugaru is characterised by its slightly fruity, smoky heat, which can range from medium (botongmat) to very spicy (maeunmat), and varieties made from sun-dried peppers offer even more depth of flavour. This deep red spice is the key ingredient for Korea’s signature pickled staple, kimchi, but is also widely used to season soups, stews, marinades, dressings and dipping sauces to boost flavour.

If whipping up your own kimchi sounds too challenging, toss together some sliced cucumbers, gochugaru, crushed garlic and rice vinegar for a delicious salad that offers that perfect balance of heat, tartness, savouriness, slight sweetness and crunchiness that Korean cuisine is known for.

Once opened, store sealed in a cool and dark environment – keeping it in the fridge will prevent it from turning mouldy, which it is prone to do. It also freezes well, if you need to store larger quantities for longer. Available online or at speciality Asian grocers. 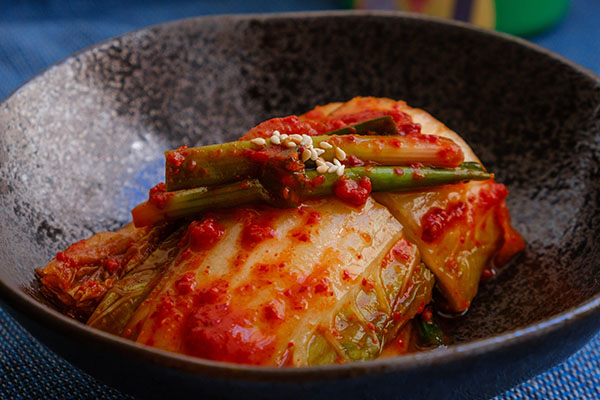 If you thought miso was a taste revelation, make way for doenjang (pronounced DEN-jahng). This Korean fermented soybean paste is more robust in flavour than the Japanese version, bringing a distinctive sour-salty-umami flavour to season stews and soups. Whereas miso’s fermentation also includes rice, doenjang is purely fermented soybeans and added salt, making it much stronger in flavour.

It’s also the key ingredient in samm jang, a dipping sauce that you’ll find on every table at a Korean barbecue, for dipping fresh veggies or much-loved lettuce or cabbage wraps. To try this at home, mix together roughly a quarter cup of doenjang and 1 – 2 teaspoons of gochujang (according to taste) with a chopped clove of garlic and some spring onion, finishing with a teaspoon of honey and 2 teaspoons of sesame oil – irresistible!

It’s available at most Asian grocers as well as online. Store in the fridge as you would with miso, and most brands will last about a year.

Koreans clearly love their spicy food, and this fermented Korean chilli pepper paste is not merely a condiment or dressing, but is used as a base ingredient to season and flavour mostly stir-fries, marinades, sauces, dips and soups.

We tracked a sugar-free version of this versatile paste down online at Faithful to Nature, but most reputable Asian grocers will stock a range of brands. Kept refrigerated, a jar has an average shelf life of about a year – but chances are you’ll use it up long before that once you start experimenting. 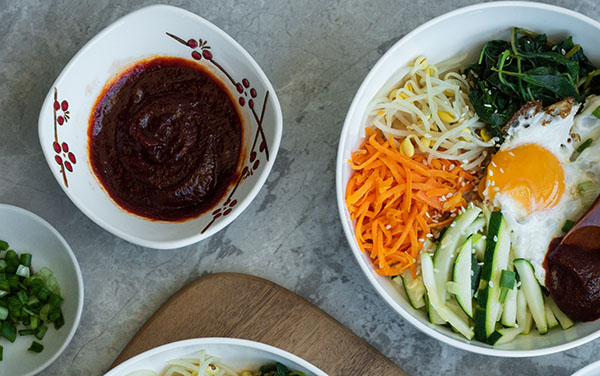 And last but certainly not least, fresh garlic. True, you’d be forgiven if you associate it more with French cooking, but it’s actually one of the most widely used ingredients across all types of Korean food, with minced garlic acting as an essential seasoning agent at the heart of most dishes. Whole cloves are also used to gently infuse soups, stews and broths, while sliced and grilled garlic is served as part of the spread at any Korean barbecue. Then there’s also the sweet and tangy pickled garlic, or maneul jangajji, served as a side dish or accompaniment. The garlic’s harsh bite is mellowed by first soaking it in a simple vinegar brine, followed by time in a soy brine. Whip up a batch next time you come home with a load of garlic heads, or browse Asian grocers for this delicacy online or in your neighbourhood.