Cape Town over the last year or two has really embraced the artisanal food culture as we all know, but it is still very much developing. We’ve had our prised deli’s but not very many, and now the deli concept has been taken further to food shops dedicated to a singular food item like Bacon on Bree, Junior (burgers) and Honest Chocolate.

Of course this is not a new concept for the French or the Brits, but it is still fairly new to Cape Town, and Luke Williams is one of these entrepreneurs bringing this culture to SA. More specifically the cheese culture, which makes perfect sense since SA’s cheese making is world class. The focus on the singular product has enabled him to perfect his trade and be apart of all aspects of cheese preparation with his suppliers of Culture Club Cheese. Culture Club Cheese has been open just under a year, opening at the beginning stages of Bree Street’s rapid expansion, which is now undeniably Cape Town’s hippest strip. Sitting amongst the heritage cottages toward the top end, neighbouring Bacon on Bree, the yellow shop pulls people in for sit-down lunch, or to purchase cheese from the ever changing variety. The yellow is obviously the shop’s defining feature, basking on a sunny Wednesday, when I visited.

‘The owner’s wanted me to make the building grey’ Luke explained, who wanted to make it as welcoming as possible, and not like those intimidating artisanal luxury deli’s many are familiar with. Judging by the flow of people and the filled tables outside, a year later Luke has fulfilled this requirement.

Without planning it, Luke has fitted perfectly into a culture of food consumerism that we associate best with Paris. ‘People will walk in with their bread from Jason’s, buy their cheese here and then go next door to buy their cured meats – its great’ explained Luke. This basic formula of locating your cheese shop next to complementary stores was instilled in him by his boss at La Fromagerie in London, and Luke couldn’t have hoped for a better fluke. Luke’s background is an interesting one, starting off with a passion for cheese making, he taught himself the craft and later solidified this at the School of Artisan Food in London. Love took him to Bangladesh and after that a pregnancy prompted him and his now wife, Jess, to move to South Africa after an offer from Fairview. The pair had never been to the country before and the three year journey from the date they arrived is one they would not have had any differently.

Jess is responsible for all the behind-the-scenes work at Culture Club Cheese, while Luke focuses on the cheese itself. His dedicated and passion emanated throughout my conversation with him, and his close relationships with cheese makers fuels his knowledge on all the cheese on the shelves. He literally can elaborate on the processes and ingredients in every cheese in the shop. He’s even has  his cheese makers on Whatsapp, evidence of his personal touch to his produce.

After asking him about the kind of farms he supports, Luke explains that 80% of the store is local cheese with 20% being imported cheese. ‘Some cheese you do have to get overseas’ he explains. All local cheeses come from small farms that many of us would not have heard of. You’re not going to find any of your big commercial producers in here because for Luke there wouldn’t be much point in that. He aims to support local artisanal farms because that is where things ultimately get interesting and where the variety of cheese changes with each delivery. Try the cheese of the month, a rich, creamy 15 month Gouda from Cullinan called Gonedsa.

Everything about Culture Club Cheese has been carefully thought out – down to the cheese-cradling bubbles in the sourdough bread, the quality driven café menu created by chef Jonlin Corolssen and the simple dairy inspired decor. This is what keeps the yellow shop’s stream of new and  loyal customers. In my books everything’s better with cheese, and this is the place to get it! 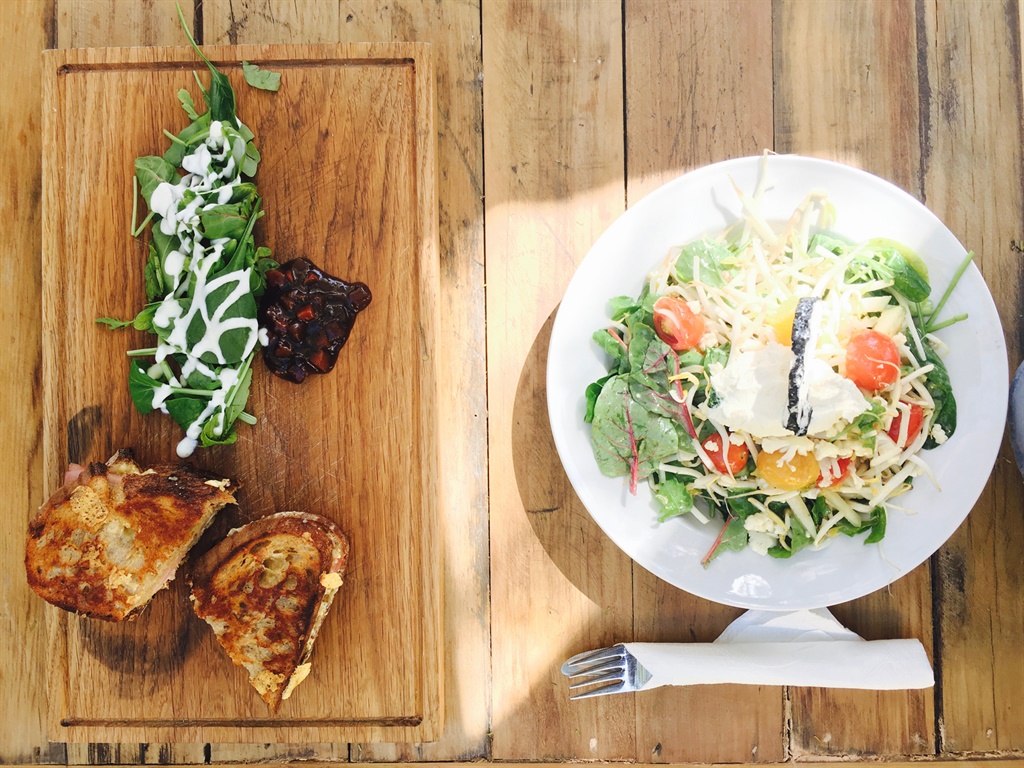 The ham and cheese toastie and Labneh and goat’s cheese salad.