We tasted 8 different mayos to find our favourite one, and the underdog surprised us all

ALSO READ: We tasted 6 of SA’s best tomato sauces: did your favourite one win?

We all love mayonnaise – there’s always at least one jar in the fridge. It’s an essential ingredient in South African classics like potato salad and chicken-mayo sandwiches, and what’s a chicken nugget without it?

Choosing samples wasn’t easy – there are dozens and dozens of mayo varieties in SA supermarkets. Take a look next time: the mayo section often runs over 3 or 4 metres, meaning mayo and mayo-related sauces take up the most real estate on condiment street. That meant we had to eliminate a few categories, and we started with any ‘lite’ or low-calorie mayo, because that’s just not the point of mayonnaise. Next, we cancelled any flavoured ones, including any olive-oil varieties.

The contestants in our test were Nola Original, Crosse & Blackwell, Hellmann’s Original, Pick n Pay No Name, Wellington’s, B-Well Vegan Original Tangy, Woolworths French Style Mayonnaise and our homemade mayo. (This is a first for a Food24 Taste Test! A traditional mayonnaise was whipped up by our resident chef using only fresh eggs, oil, mustard, vinegar and a little salt.)

We set out the eight samples with no labels for the tasters and served them with hot slap chips from Lusitania Fisheries in Cape Town.

We also analysed the prices of each mayonnaise and its overall sodium content.

Read on for the results:

Homemade mayonnaise: “Very rich and buttery”
Our own homemade mayo was less than well received – in fact, it came in dead last! Most found the texture too firm and rich, and the flavours of the eggs and oils were overpowering. With all natural ingredients, however, it was hardly ever going to compare to the commercial and processed mayonnaise samples in the test.
Overall score: 37/100

Crosse & Blackwell tangy mayonnaise: “Tastes like the mayo I grew up on” As the OG mayo, Crosse & Blackwell has a special place in our hearts. The sharp, vinegary flavour is overpowering, and it reflected in the low points score. One taster conceded, “Goes well with a chip – but then, what doesn’t?”, which kind of sums it up. An informal survey showed that we all agree that Crosse & Blackwell is the only mayo to use if you’re making a lekker potato salad, but for other applications, maybe choose one of the top scorers. Just watch out for the high salt content, though!
Overall score: 44/100 This was one of the lesser known brands in the line-up, and a newcomer to South African shelves. This sauce scored very well on appearance, with tasters noting the glossy finish and smooth, creamy texture. The flavour was low on punch, though, with one taster commenting that it “tastes like the mayo KFC uses”. We’re not sure if that’s a good thing? The hot favourite going into the test, Hellmann’s scored some serious points on appearance and texture. Tasters commented “rich and creamy” and “this tastes real and looks natural”. It was also the most distinctive of the brands, with most able to correctly identify this sample as Hellmann’s. Most found it too salty, which lost it some serious points.
Overall score: 67/100

Pick n Pay No Name: “Has an awesome balanced taste” The other unexpected sample in the test was this budget-friendly no-name version from Pick n Pay. Described as “ rich and creamy”, “ looks like a good mayo” and “ TANGY! Yum”, it was a hit with many tasters. Some said it needed a little “something else” but, at R33 per kilo, there’s nothing wrong with this payday-week mayo!
Overall score: 69/100 Nola Original: “This mayo should be used in a salad” A much-loved mayo, Nola was well received by our tasters. The creamy texture was a big plus, but it was the flavour and zingy hit from the vinegar that they all loved. Some found it too tangy but, in third place, Nola Original did well. It also offers fantastic value, at under R30 per kilo.
Overall score: 70/100 This mayo uses a vegan recipe, with no eggs or dairy products added. Despite not being a true mayonnaise in the traditional sense, B-Well was very popular with our tasting panel. Tasters enjoyed the tangy lemony flavour and creamy texture. Oddly, three tasters said they could perceive the egg flavour, which was reported as both a negative and a positive trait. B-Well vegan mayonnaise came in an impressive second place in our test, a real underdog.
Overall score: 71/100 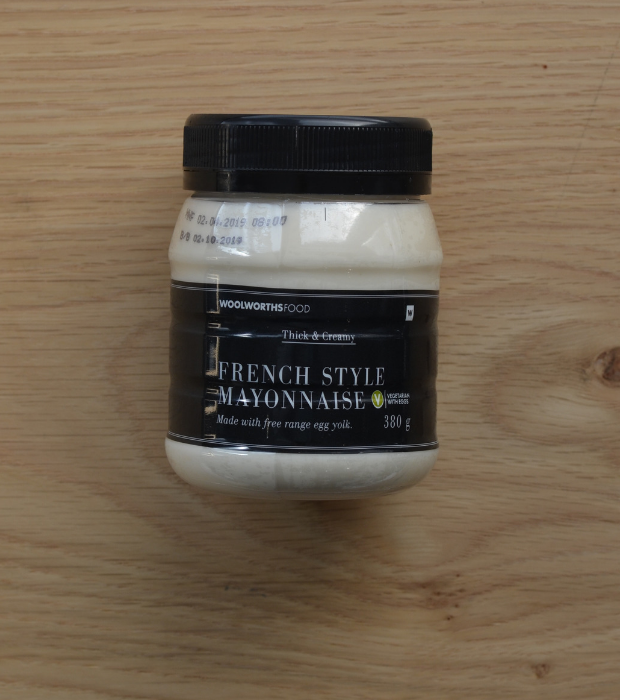 This lesser-known mayo is quite hard to track down but, man, are we glad we found it. This creamy and rich mayonnaise has just the right texture, with one taster saying: “No weird aftertaste and a perfect mouthfeel!” Coming out as our ultimate champion, the Woolworths French Style Mayonnaise was by far the most expensive, coming in at almost R87 per kilo. That being said, if you want to treat yourself, it’s definitely worth it!
Overall score: 75/100

And the winner is Woolworths French Style Mayonnaise READ NEXT:The most important thing to come from #Budget2019 is this story about mayonnaise

Which is your favourite mayonnaise? Connect with us on social media and let us know!

– All tasters tasted and scored all eight samples.

-The samples were tasted with plain hot potato chips (no added salt or vinegar).

– The samples were not labelled and were tasted in a random order.

– Each sample was rated on appearance, texture and taste.

– This article is not sponsored in any way, and Food24 was not paid to come to any particular result. Our taste tests are always unbiased and intended for your entertainment; however, you may have come to this article via various paid-for advertising.