We tasted and tested different fruitcake loaves to determine which is the best-tasting one to add to your festive celebrations this year.

It’s that time of year again when fruitcake has hit the shelves in all its fruity, nutty and spiced glory! Whether you go for a plain boozy version or the show-stopping fully iced gateau, fruitcakes are always guaranteed to bring that rich festive feel to the party.

But, as any fruitcake fan will know, not all fruitcakes were created equal. Recipes, along with ingredients, vary greatly from one fruitcake to the next. That’s why, to see which fruitcakes truly bring that festive fruity flare, we went in search of all the non-iced fruitcake loaves we could find to taste back at the Food24 headquarters.

We looked at important aspects like cost, flavour, texture and generosity of fruit distribution to determine which fruitcakes were worth their weight in raisins and which sadly missed the mark. Additionally, we noted which fruitcakes matched the description on their packaging – some fruitcakes boast about being filled with lush vine fruit, while others claim generous amounts of glacé cherries, mixed candied peel and splurge-worthy nuts. We put it all to the test. 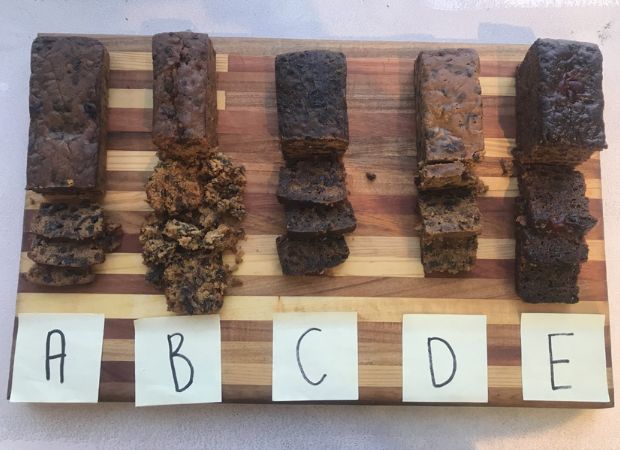 The results were incredibly close, but here’s what the samplers had to say:

Locally baked and made with juicy KWV brandy-soaked vine fruit, this fruitcake was densely packed with delicious vine fruit and candied peel bits. It was also perfectly moist. Additionally, the rich treacle flavour came through nicely – it’s no wonder it was a favourite on the day!

Tasters all noted that the sample packed a good flavour and was dense and satisfyingly fudgy, with a good amount of vine fruit. Sadly, there were no cherries to be found in the sample on the day, but the brandy flavour definitely came through.

One sampler said: “My favourite sample – you can taste the brandy, and the fruitcake is dense and delicious”, with another echoing the sentiment: “I enjoyed the balanced taste of this cake. It was nicely moist and flavourful.”

At R59.99, this is a festive steal where fruitcake is concerned! 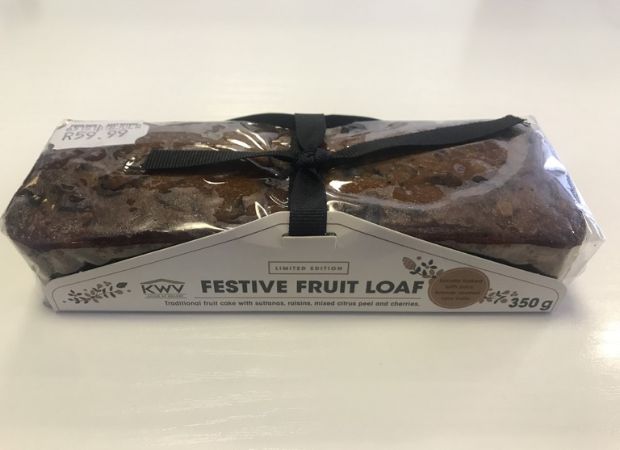 Close runner-ups were both the brandy and no-alcohol fruitcakes from Woolworths.

While the glacé cherry distribution was rather scant, the sample did deliver on satisfyingly juicy pops from the assortment of raisins and sultanas. The sample itself was wonderfully dense and delivered on the flavour front, but some tasters noted that it could have been more moist, which ultimately affected the scoring.

“Rich, with well-balanced flavours… my favourite,” one taster said, while another noted: “Really good fruitcake flavours – sweet and moist, with pops from the raisins.” Some, however, felt that the loaf itself could have been more moist and a little nuttier, noting that “there are no nuts in this fruitcake and it’s a bit too dry, not my fave.”

At R94.99, it’s a bit of a splurge, but if you love alcohol-free fruitcakes with sweet and juicy vine fruit, you won’t be disappointed with the investment. 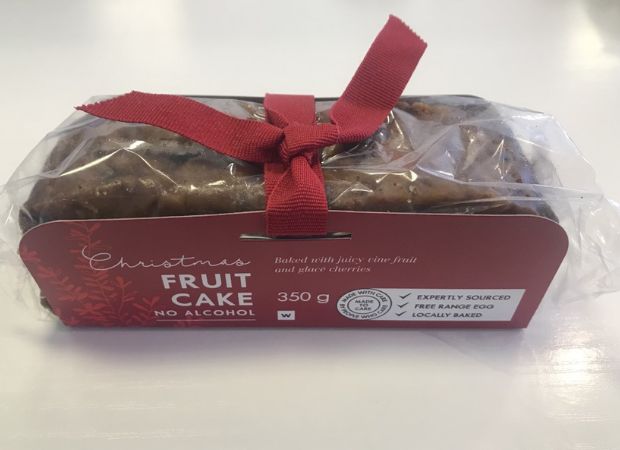 This sample was amazing on a flavour front but ultimately lost points due to its crumbly dry nature. Though the flavour was there, the sample was neither dense nor fudgy. There were also very few diced almonds to speak of and no glacé cherries visible in the sample that was tasted on the day.

The flavour of the South African brandy did come through, a welcome note for most of the tasters. They noted things like: “The brandy flavour is quite potent. Missing the nuts and the cake is pretty dry in texture” and “Loved this sample on the taste front – it was perfect flavour-wise, but the texture was very dry and crumbly, which was a letdown.”

At R119.99, this is a costly option but ticks all the flavour boxes. 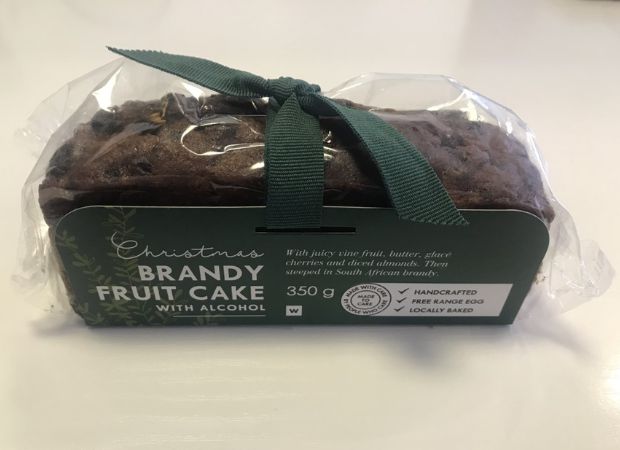 Packaging description: Made with cherries, pecan nuts, juicy vine fruit and laced with brandy and sherry.

This sample lacked a bit of variety when it came to fruit – there were plenty of raisins present, but no cherries or pecan nuts were detectable in the sample on the day. On the whole it lacked flavour, one taster noting that the fruitcake was bland but fudgy, dense and moist. Both the brandy and sherry were subtle.

Tasters commented as follows: “This one is lacking a nice variety of fruit and there are no nuts. Not a great version of a fruitcake” and “I must admit this sample had a soapy flavour – too fragranced for my liking.”

At R55.99, this could be your perfect fruitcake if you can’t get enough of raisins. 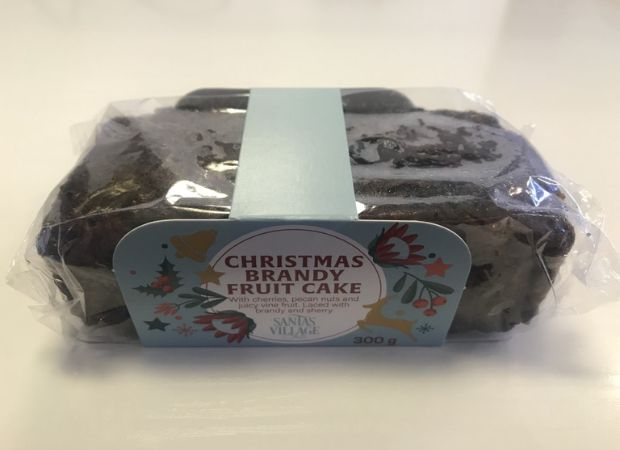 Packaging description: This decadently rich cake is full of luscious dried fruit and a blend of aromatic spices.

Samplers noted that the fruitcake had a somewhat artificial taste to it, with an oily feel and aftertaste. However, the sample was generously filled with dried fruit and a visible amount of cherries.

One taster noted: “It was quite dark and definitely lacking that fudginess, but you could really taste the cherries and candied peel.”

At R57.99, this alcohol-free fruitcake won’t break the budget. 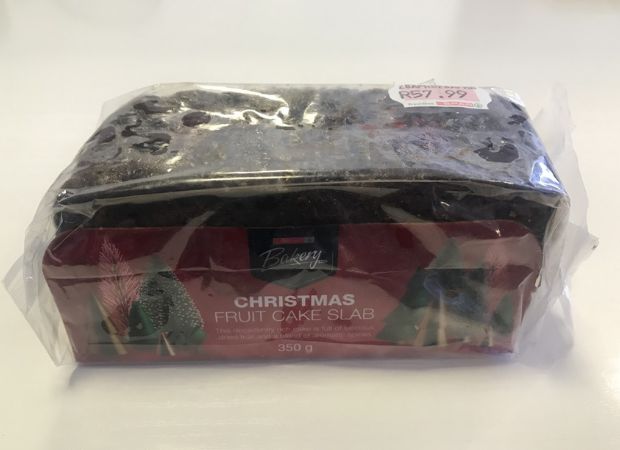 – All tasters tasted and scored all samples. Each individual taster’s preference impacts the score they give.

– The samples were not labeled and were tasted in random order.