Joburg gourmet zone: why you have to eat in Linden

Everyone loves a bustling café-culture high street. But, while the buzz around many of Jo’burg’s sidewalk destinations seems to peak, then subside, Linden’s keeps going from strength to strength.

That’s not surprising, given that the suburb’s eateries cater to literally every palate; from the adventure eater who’s dying to try a new global cuisine to the coffee-craving hipster and even aunties catching up for their weekly cake.

And yet, despite the disparity between all these restaurants, they’re united by a distinctly community feel. That’s precisely why Romuald Denesle settled on Linden as a venue when he opened his French restaurant, A la Bouffe, two years ago. “It’s got a great vibe; it’s small and cosy and has that suburban feel.” That’s one of the reasons it continues to be a favourite with people in search of a good meal out, he believes.

“Linden has a great small-town atmosphere, so different to the standard mall offerings. The restaurants are intimate and diners often have the chance to meet the chefs and owners” explains Denesle.

In an age where diners are becoming more interested in the provenance of their food, that’s a major plus. In fact, Janine Walker – whose Italian-inspired restaurant, Rosto, will join the Linden coterie in July – says that she loves the reputation the suburb enjoys for quality. “People are doing really interesting things with food,” she says. She’s not only talking about the exploration into international cuisines – in one street, you can eat French at A la Bouffe, Mexican at El Jalapeno and Asian at Hashi – but also about the emphasis on artisanal goodies, from cheese to coffee.

Here’s what’s on offer, and where:

Paputzi’s
This Linden grande dame is a favourite for brunch under the trees. Oregano Catering and Patisserie
This is the place to go for sticky cinnamon buns and luscious cheese cake.

The Argentinian
Famous for its croissants and coffee.

The Whippet
The landmark that really put Linden on the culinary map, fans rave about everything from the coffee to the unusual bakes and scrumptious breakfasts.

The Fat Zebra
Warm and welcoming, this café is touted as one of the best spots in Jo’burg for Eggs Benedict. (Image by The Fat Zebra)

Amuse Café
The eclectic menu aside, the major draw card here is the live music – anything from blues to jazz. 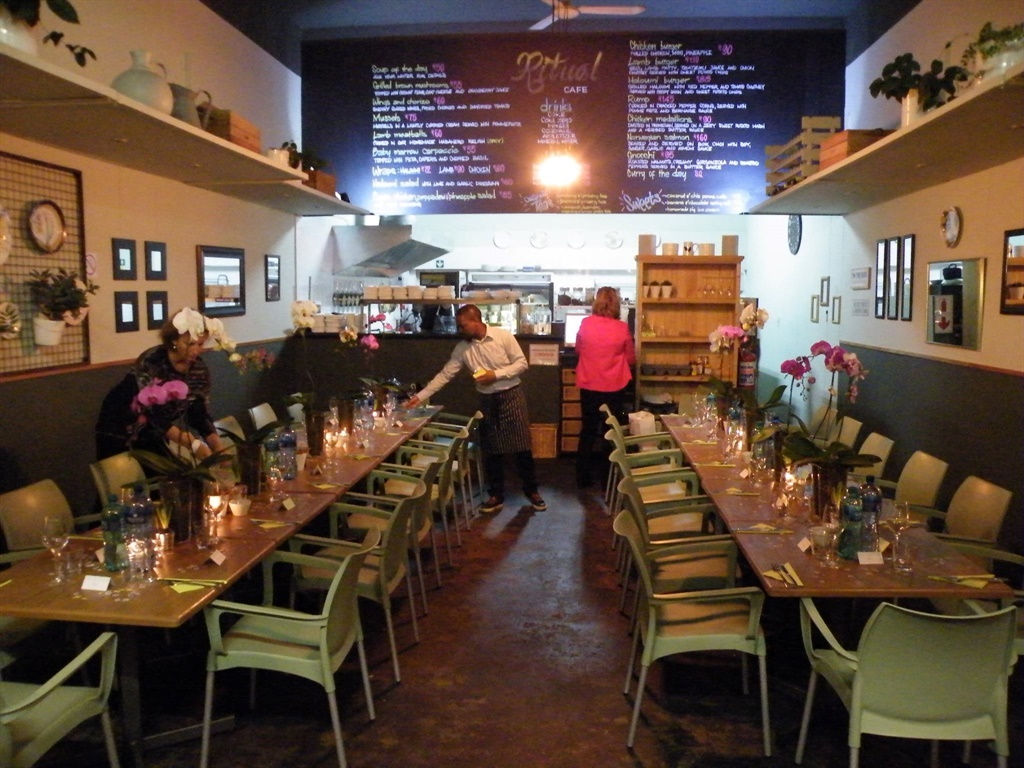 Satori
Got a pizza craving? Head here for paper-thin bases with hearty toppings.

Hashi
As a specialist in Japanese fusion cuisine, Hashi’s flavours are big and bold – and often unexpected. A la Bouffe
This family run restaurant is known for authentic French flair, with a menu featuring staples like frog’s legs, onion soup and delectable pastries. (Image by A la Bouffe)

El Jalapeno
Linden’s new kid on the block is festive and vibey. Highlights include traditional Mexican drinks like the rice, cinnamon and coconut drink, horchata.

Crafters and Craving
Another Linden landmark, best known for its harvest tables and high teas.

Gravity Café
Enjoy café classics like burgers and wraps, or opt for something a little out of the ordinary, like peaches and Camembert chicken.

Cheese Gourmet
The name says it all.

Yield Café
The ideal spot when you need a serious caffeine fix. Try the signature speciality, a swart skaap, or indulge in Lindt hot chocolate.

Another ‘must’ on Linden’s global food map, Bikaner is the suburb’s tribute to India.

The tasting menu at Benguela on Main