It’s half past four on a Wednesday afternoon, and I’m halfway down a mountain, somewhere in a darkening corner of the Drakensberg. My calves are screaming at me, my quads are moaning in sustained agony, and I’m trying to ignore the drop just feet away, that would guarantee a spectacular death should I slip over the edge (but get me a couple of days of high-profile headlines).

I’ve been trekking across this wretched mountain for ten and a half hours, on a day that shows no signs of ending. And all I want – all I really, really want – is an extremely large glass of wine…

Just over a year before, I had joined former All Black captain Sean Fitzpatrick, former Ireland captain Brian O’Driscoll and former Springbok captain Jean de Villiers at the Hong Kong home of Annabelle Bond, the record-breaking adventurer who climbed the highest peak on all seven summits in less than a year.

We were gathered to announce the second Just Challenge event in support of the Laureus Sport For Good Foundation, an organisation Sean serves as chairman of, and that the rest of us proudly support. The first challenge had seen a hundred guests from around the world trek through the Himalayas with cricketer Michael Vaughan; round two was Challenge Africa, and four days hiking through 100 kilometres of the Drakensberg’s more undulating terrain. And so last week I found myself with Brian, Annabelle and Jean, along with the relentlessly energetic Bryan Habana, for my very first hike. It’s just not something I’ve done before – the Nicholl family doesn’t really hike, much like vegans don’t really eat meat.

I’d purloined a pair of boots that looked the part, Googled ‘what to wear on a hike’, and loaded up my rucksack with miniature bottles of Shiraz, but had no idea what I’d got myself in for, and thus woke up at five o’clock on the first morning with a sense of dread.

Along with two rugby players and one of mountaineering’s more extraordinary exponents, we had a hundred guests from around the world. Brian O’Driscoll’s younger sisters joined us and proved to be the two quickest O’Driscolls on the trip. Annabelle brought a small army of supporters out from Hong Kong.  A towering Scot named Iain arrived and spent the week in a sock and sandal combination that’s apparently de rigueur in Glasgow. We had a woman James Blunt apparently once wrote a song about, and a guide named Gustav who wore shorts tight enough to suggest he spends his spare time obsessively watching Kylie Minogue videos. And we had 100 kilometres of the Drakensberg to negotiate.

The first day started brightly enough, Jean joining us for seven kilometres at a sprightly pace, before finishing as planned to save what little remains of his knees from a career blighted by injury and repair.

Spirits were high, the pace was solid, and friendships flourished as the opening day’s route unfolded through some quite breathtaking surrounds. The Drakensberg is a place of raw and largely unspoilt beauty, vested of stillness and isolation that’s in welcome contrast to the rush and intensity of the lives most of us live. At times it’s almost lunar in that isolation, and the sense of escape it offered, as four groups of 25 worked their way through the trek, was palpable.

But that first day ended up taking eleven and a half hours, the final Mordorian descent a brutal ask of even the athletes. There was the understanding, though, that the first day, 35 demanding kilometres, had been managed, and that memories of the route would last far longer than the pain, and so day two was more upbeat; a shorter, forested route through Hobbit territory, and past waterfalls and bemused herds of zebra – and by day three, a long but leisurely stroll up Spioenkop and its attendant history, he was a spring in the step and the imminent danger of people breaking into song. 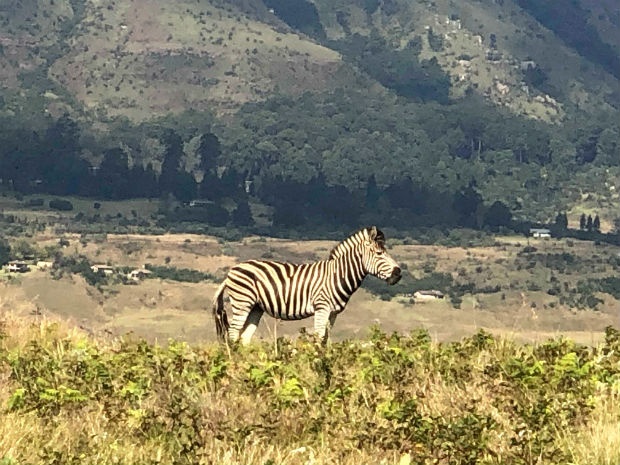 The real triumph, though, came on day four, where a tricky, unsteady descent led into The Cavern, the Drakensberg institution that offered the delights of warm showers, duvets, mattresses – and one of the more surprising cellars I’ve stumbled upon.

The wine that had been envisioned on day one (and two, three and four) was suddenly available in abundance. Kleinood’s soft and elegant Tamboerskloof Syrah. Hartenberg’s increasingly sought-after Shiraz. A few older bottles of Anthonij Rupert Cabernet Sauvignon, appropriately rich and rewarding after the four days we’d had. And, for a fleeting moment, six bottles of the 2015 Kanonkop Paul Sauer, now a near-mythical wine – all purchased fast and drunk faster. There are South African finance ministers that have lasted longer than those six bottles.

The wine flowed in celebration of the group’s achievement in finishing Challenge Africa, but also in raising over US$400 000 for the Laureus Sport For Good Foundation, in recognition of Just Challenge leader Lucy Bennett Baggs and her team giving us so memorable an experience, and in celebration of many people making their first visits to South Africa. Most of those people will be back, I suspect, exploring the beauty of this country, reliving the Challenge Africa adventure, and expanding on a newfound love of South African wine. And perhaps even spending eleven and a half hours scrambling up and down mountains. What I’m drinking this week: Shiraz descends on Franschhoek this weekend at the annual Shiraz And Charcuterie Festival at Anthonij Rupert, the nature of which shouldn’t be too hard to work out. Sadly I’ll be missing it, but I had an advance taste of some of the wine that’ll be on the show, which includes a staggeringly good wine from Boschkloof, the Epilogue syrah. Reenen Bornan’s star is rising by the day, and it’s wines like this that are the reason why: a wonderfully gentle and supple syrah that still manages great depth and density, with some beautiful dark fruit. There’ll be loads of wine to taste this weekend (if you can get your hands on a ticket); I’d lay siege to the Boschkloof stand, and demolish as much of the Epilogue as possible.