5 Genius ways to use up your leftover Heritage Day desserts

by Katelyn Williams of The Kate Tin
in Food News
0

I don’t know about you, but one of my biggest fears when having people over for a meal, is them leaving hungry. But over-catering provides you with another problem – leftovers!

After this Heritage Day weekend, you’ll probably have bliks full of koeksisters and foil pie trays with one lonely slice of melktert that nobody wants. Ag, shame. It’s okay though because these ways with leftovers are so tasty, you’re going to want to make extra Peppermint Crisp tart JUST so you can turn it into ice cream.

Peppermint Crisp tart ice cream sandwiches
Freeze any leftover peppermint crisp tart in a loaf tin lined with baking paper until solid. Cut 1 cm slices and sandwich between two tennis biscuits. Or you could simply serve it as is – semi freddo style! 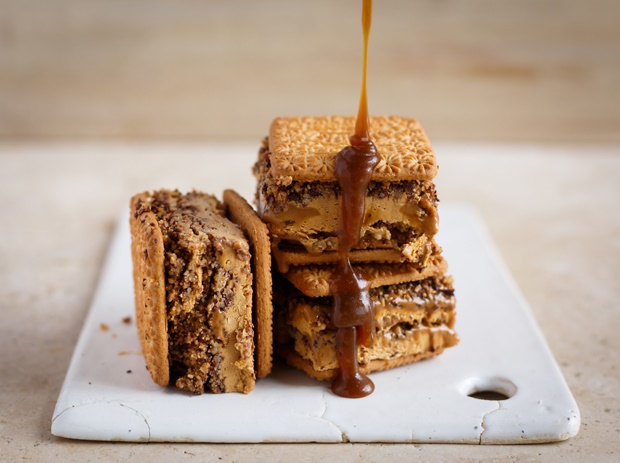 Koeksister French toast
Whisk 1 egg, 1 cup milk and ½ tsp cinnamon and a pinch of ground cardamom together. Slice the koeksisters in half then dip in the egg mixture until it’s soaked up and soft. Heat a knob of butter in a frying pan and fry the koeksisters, cut-side down until golden, then flip and brown on the other side. Serve the French toast drizzled with honey, rose syrup and chopped pistachios if desired.

Hertzoggie truffles
In a food processor, place the hertzoggies and a Tbsp of rum or brandy. Process until the mixture comes together. Wet your hands then roll tablespoonfuls of the mixture into balls and then roll in desiccated coconut. Koeksister croutons
Break koeksisters into bite-size pieces and spread them out on a baking tray. Place in an oven preheated to 140°C for 20 minutes, stirring occasionally, until golden brown, dried out and crispy. Remove from the oven and immediately toss in cinnamon sugar (or vanilla sugar). Allow to cool then serve scattered over ice cream or pancakes. Store in an airtight container.

Milk tart shake
In a blender, add 2 scoops of ice cream, a leftover slice of milk tart and a ½ tsp cinnamon. Blend until smooth (add a little milk if you’d prefer it more liquid) then pour into a milkshake glass. Dust with cinnamon to serve.

Do you have any fun leftover ideas? SHARE them with us in the comments below or email us!

Ever lived abroad and realised some of your favourite foods weren’t a ‘thing’ anywhere else? by: Julie Donald | 15 Sep 2017 (image: iStock) With Heritage Day coming up I was browsing for cool South African food ideas, and I started to realise that there is a ton of great food that I thought was universal, but turns out is unique to South Africa.